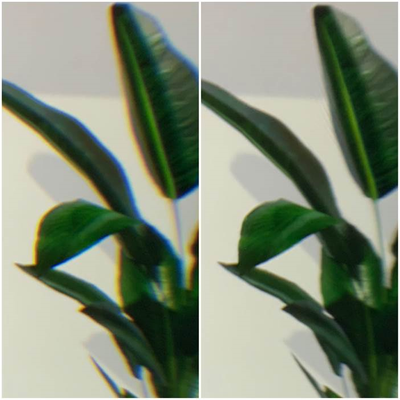 
During development of the HP Reverb G2 in partnership with HP and Valve, we’ve made some improvements to the Windows Mixed Reality VR platform we’d like to share today. These improvement apply to some existing VR headsets available on the Windows Mixed Reality platform in addition to the HP Reverb G2 devices. All of these improvements are available today with the latest versions of Windows 10 (Details here).

We have applied these new improved algorithms to several Windows Mixed Reality headsets as outlined in the Device Specific Improvements section below.

One important note we would like to highlight is how to get into the eye box when you put on your headset. All Fresnel lenses in every VR headset have something called an eye box (the actual shape is more like a cone, but the term we use is “eye box”). That is the ideal position (it’s actually a very small volume) where your eyes are directly behind the center of the lenses commonly referred to as the “sweet spot”, and this is the location we calibrate for. The physical IPD slider on devices such as the HP Reverb G2 allows you to move the lenses inward/outward to align horizontally with the center of your eyes, but even more important is to adjust the headset vertically until you see the sharpest image possible. It can take some practice, but once you’re able to get into the sweet spot of the eye box, you’ll see an incredibly clear image across your field of view. If you feel like you see any color fringing or radial distortion, try adjusting the IPD slider on the bottom of the headset and moving the headset up and down on your face slowly until the image is clearest. If you’re out of the eye box, you can often see some chromatic aberration artifacts near the center of the lenses in any VR headset. 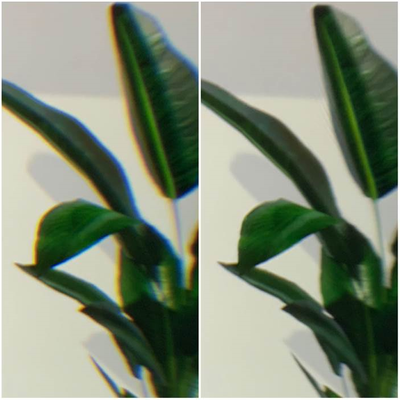 Almost every VR headset released to date has had some level of visual corrections implemented in software or on the GPU to correct for artifacts caused by some aspect of the hardware. Correcting for lens distortion is a great example of this.

Every VR headset the industry has seen has pushed panel technology to the limits, and with that comes subtle artifacts worth correcting for. The displays inside the HP Reverb G2 are amazingly high-quality LCD panels with a native resolution of 2160×2160 per eye at 90 Hz with virtually no screen door effect. However, most LCD panels on the market do not have filters that perfectly match the chromatic range of red, green, and blue light, and that can cause something we call light leakage.

As an example of light leakage, if a pure green pixel leaks a little bit of red light through the filter, normally, in a smartphone or flatscreen TV, you would never know that a little bit of red light is leaking through that green pixel. But in VR, that slight red leaked light is refracting through lenses, and since red, green, and blue light refract differently through the optics, that leaked light of a different color separates and can cause what appears to be a subtle colored ghost of the rendered image causing color fringing. We developed technology to correct for this in most situations where there is enough light in neighboring pixels to compensate for the artifacts.

It is important to point out that light leakage artifacts appear different from chromatic aberration artifacts. Chromatic aberration generally appears as opposing red/blue color fringing where light leakage can appear as red/cyan, green/magenta, or blue/yellow color fringing (depending on the panel design). This can also affect the overall color tint of the headset due to added light in a single-color channel. Our correction algorithms reduce both color fringing and the overall color tinting (Fig. 2).

Fig 2. Simulated light leakage without correction (left) and with correction (right). Notice the false color tinting on the left and the green and magenta color fringing. Images can also appear slightly blurrier without this correction (left).

If you’re unfamiliar with the term god rays, it’s a common artifact of Fresnel lenses where light can appear to stretch and glow from the center of the lenses outward and creates an effect that appears similar to sunlight shining through dense treetops, often referred to as sunbeams or god rays.

God rays have been one of the most talked-about artifacts of Fresnel lenses, and the optics engineers at Valve did an amazing job of producing lenses for the HP Reverb G2 with almost no visible god rays relative to all previous headsets on the market. These reduced god rays aren’t just an improvement for the viewer; it’s also an improvement for the entire calibration process that drives features like chromatic aberration correction and distortion correction.

Development on the HP Reverb G2 has led to some new approaches to correcting for certain visual artifacts as described above, and we were able to apply some of these new techniques to existing products in-market, namely, the Samsung Odyssey+ and the original HP Reverb G1. For the Samsung Odyssey+, we were able to improve chromatic aberration artifacts at the periphery. For the Reverb G1, we were able to improve chromatic aberration artifacts, reduce radial distortion, apply light leak correction, and improve rendering performance by about 8% in most applications from an updated and optimized hidden area mesh. All these improvements are also present in the HP Reverb G2 devices. These improvements are available in the latest Windows Mixed Reality runtime (see Windows Update instructions below).

We are continually improving our software platform. To ensure you are getting the best experience, update to the latest Windows Mixed Reality VR runtime using Windows Update.

You can find instructions for how to update Windows 10 here.

We are always listening to our users and improving our platform. Please use the Windows Feedback Hub to file bug reports or make suggestions to improve any aspect of our Mixed Reality products. Our Windows Mixed Reality team regularly reads and reviews all feedback and bug reports submitted by our users, so please let us know if you see an opportunity for us to improve any aspect of our software.

You can find instructions for how to file bugs and feedback to the Mixed Reality team here.

We are excited for the launch of the HP Reverb G2, and we look forward to seeing the community enjoying this headset as much as we are.