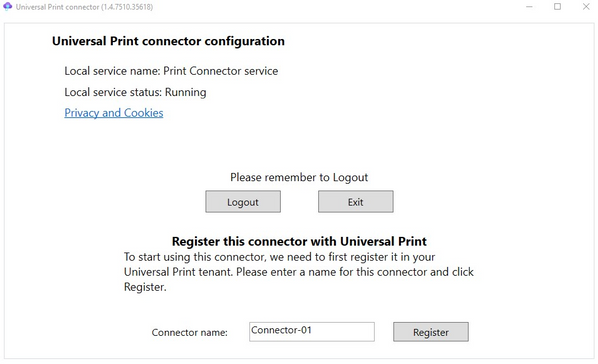 The future of print

Universal Print moves printing to the cloud by removing the need for the on-premises print servers and Active Directory domain controllers that have been traditionally necessary for printing. Instead, Universal Print uses Azure Active Directory (Azure AD) and enables IT administrators to share printers across their organization, regardless of where end users are located.

The temporary need for a connector

There are many organizations; however, that want to use Universal Print today, without having to wait for Universal-Print-ready printers to be widely available in the market. Some have recently made investments in printers that they do not expect to replace soon, while others simply want to start taking advantage of cloud-based printing.

The connector is made up of two major components:

The printer interface handles communication with the physical print device. It performs tasks, such as submitting print jobs to printers and getting status information from these printers.

Communication with Universal Print is based on the public Internet Printing Protocol (IPP) standard from PWG and the Microsoft Microsoft Graph API. The cloud service interface of the connector is a communication client of Universal Print. It uses the same protocol and API.

The connector printer interface could be implemented using any API that is suitable for communicating with the target device or group of devices. For example, if the connector is running on Windows, then the Windows print APIs could be used.

Partner connectors are typically designed to better fit into the partner’s existing solutions, as noted by Jamie McClunie, Product Manager at PaperCut:

Instructions on how to download and install the connector, and a short list of prerequisites, can be found in the Universal Print connector quick start guide.

There are many deployment configurations for the connector: Registering the connector with Universal Print

We want to hear from you!

The Universal Print connector was developed in response to requests and feedback received via our Universal Print feature requests board on Tech Community. Please continue to add features you would like to see in the connector on that page or upvote ideas that are already there.

If you have questions about the connector, please check out the Universal Print Community to find an answer or post your question for our team to answer.