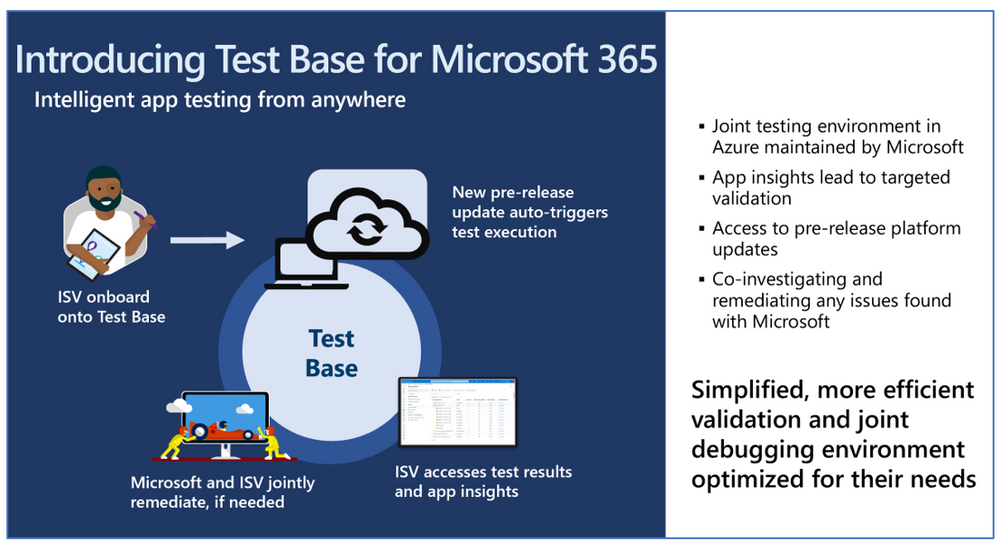 We are excited to update you on the latest Test Base for Microsoft 365 features and how you and your organization can take advantage of this service.

A little more than a year ago, we announced the availability of a new testing service targeted at desktop applications called Test Base for Microsoft 365. Over the last several months, the Test Base for Microsoft 365 team met with several enterprise customers to learn more about their testing operations and challenges. They shared some valuable insights into enterprise behaviors and key pain points, including:


Subtle changes have happened in the application testing space since the launch of Windows 10. It has ushered in an era of superior application compatibility, with newer processes such as ring-based testing and flighting strategies helping IT pros pilot devices against upcoming builds of Windows and Office, while limiting exposure to many end users. Despite these positive changes, there is still a need to test business critical apps such as antivirus, VPN or internally-developed LOB applications.

What is Test Base for Microsoft 365?

Test Base for Microsoft 365 is an Azure service that facilitates data-driven testing of applications. Backed by the power of data and the cloud, it enables IT professionals to take advantage of intelligent testing from anywhere in the world. If you are a developer or a tester, Test Base strengthens your application’s ability to continue working even as platform dependencies such as the latest Windows updates change. It will help you test your applications without the hassle, time commitment, and expenditure of setting up and maintaining complex test environments. Most importantly, it will give you access to pre-release Windows Updates on secure virtual machines (VMs) and world-class intelligence for your applications.

The IT pro and Test Base

As an IT professional, you’re no doubt evaluating modernization technologies that will simplify the application and device management across your user base. Technologies such as Windows Virtual Desktop and MSIX, in tandem with early adoption via the Windows Insider Program, help reduce the application compatibility concerns associated with Windows and Office updates. Based on your feedback, the testing workflow usually takes you outside of the core device management tools that you use today. In addition, the install base or the business-critical nature of some applications can make it painful when encountering a failure. The subsequent coordination of failure analysis with software vendors or internal developers can be time consuming and can delay remediation. You have asked that testing and validation be part of the seamless workflow – assess, remediate, deploy at scale.

Test Base aspires to help our customers focus their test efforts and get to the confidence they seek faster. Our initial offering focused on critical third-party software vendors whose applications (anti-virus, VPN, disk encryption etc.) we all depend on. As we expand the value to our enterprise customers, we want to invite you to onboard your internal LOB applications on Test Base. Not only will you get test coverage against Windows security and feature updates, but also data insights and support on application failures, allowing you to quickly remediate fixes prior to broad release across your organization.

While we further build out this seamless workflow, here is what you can do now as an IT professional – nominate the software vendors or onboard your internal standalone apps. Once onboarded, you will benefit by having the confidence signals for the applications that you care about.

We are constantly innovating and adding capabilities based on customer feedback. Here’s a quick summary of new features that you can look forward to:


What’s next on the roadmap for Test Base for Microsoft 365?

We are continuously gathering and collaborating on feedback to improve upon and prioritize the future for the Test Base service. Examples of capabilities that you can expect to light up in the next few months include asynchronous alerts & notifications, support for API-based onboarding and support for Office 365 testing.

Join the Test Base community

We are actively engaging with enterprise customers now to understand their needs and design a solution that addresses their use cases. If you would like to participate in this discussion, please join in! I would also like invite you to come join us on the new Test Base for Microsoft 365 community on Tech Community so you can share your experiences and connect with other customers using the service.