It’s #OpenSourceOctober! How many of these 10 open source projects do you know?

Do you remember your first encounter with an open source project? Some of the most popular developer tools, frameworks, and experiences in the world are built around open communities. Most coders can recall the first time they ran into an open source project on GitHub, SourceForge, CodePlex, Google Code, or just downloaded one from someone’s blog and asked themselves “what is this open source thing, anyway?”. While consuming, contributing to, and talking about open source feels normal today, it didn’t exist before 1998 but it has made an immense impact over the last 22 years!

So, now it’s time to test your open source project knowledge! How many of these did you already know about? Share your ‘score’ in the comments below!

One of the first open source breakouts was Laurent Bugnion’s MVVM Light Toolkit. Laurent was a Microsoft MVP at the time and is currently a Senior Cloud Advocate for Microsoft. For enterprise developers especially, it was a shock in 2009 to find someone creating a great software package and not charging for it. But it clearly also wasn’t freeware because it didn’t force you to watch ads or download potential malware ;). It also happened to be the best tool for data binding and lightweight messaging in XAML apps, and everybody was using it. Free, useful software with no strings attached changed how many of us understood enterprise development from that point forward.

Open source isn’t just about free distribution; it’s also about having a decentralized developer base. The current GitHub project with the most contributors (19.1K according to Octoverse) is VS Code, Microsoft’s super extensible code editor. Since 2015, developers around the world have been continuously adding new features, visual schemes, and language integrations.

WriteableBitmapEx was a CodePlex project that took the .NET  WriteableBitmap class and made it better by adding tons of helpers as .NET extension methods. All this code effectively turned a basic component of most platforms, the common bitmap, into a powerful drawing surface to brighten and animate the battleship–gray user interfaces of the time. 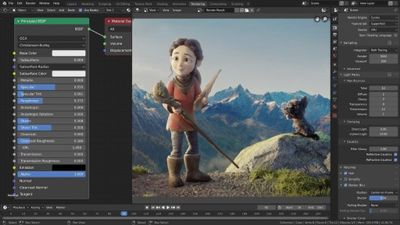 Instead of trying to improve something already out there, Blender is a great open source example of looking at something already dominant in the marketplace and trying to replace it. Blender is a free 3D modeling tool that competes with the best of the best. The proof of its success lies in just how many creative professionals are now using it in their daily workflows. In order to support this important free tool for the creation of 3D models for AI research, Microsoft along with many other software companies contribute to the Blender Development Fund.

Going a little further back in time, DotNetNuke (DNN) began its life as a 2001 Microsoft reference application, IBuySpy (familiar to anyone who might remember what Northwind and AdventureWorks were). Shaun Walker added features to the reference application and released it as an open source project. It was an early .NET-based content management system best known for its extensibility and quickly formed a community of developers who built and sold plugin solutions for it. Shawn Wildermuth recently did an amazing interview with Shaun Walker about what it’s like to maintain a project for 14 years!

The purpose of OpenVR is to emphasize the “open” part of the open source movement. It provides an API that developers can program against while ignoring the actual hardware that runs it. This means the underlying hardware (HTC Vive) can change without directly affecting your app. It also means your app can potentially run on other hardware devices (like Oculus, Windows Mixed Reality, etc) without major changes. It’s also the bridge technology that allowed Windows Mixed Reality headsets to automatically play the large catalog of Steam VR games when WMR was first released.

TypeScript came out in 2012, after two years of internal development at Microsoft, as a way to formalize the way JavaScript is written without breaking compatibility with it. TypeScript is probably best known for introducing static typing to web programming, but it also extended JavaScript with other programming features like classes, interfaces, and generics.

At some point in software history, developers migrated from using XML to JSON as the ubiquitous, cross-platform serialization format. It turns out, however, that a cross-platform format still needs translation software to talk to specific platforms. In the .NET world, James Newton-King’s JSON.NET fills that role. We all use it. What more is there to say?

2007 was a watershed year for formal software processes and paradigm inversions. We also learned that we needed tools to test first, mock up our classes, and implement continuous integration. For many software architects, xUnit was the way to go and we’re still using it 13 years later. Shawn Wildermuth did a great interview with Brad Wilson on maintaining the xUnit repo over such a long period of time.

OpenCV is everything you want an open source project to be. OpenCV is a computer vision library that uses machine learning techniques to analyze images. It has applications that run from interpreting handwritten letters to segmenting, classifying, and identifying objects in images. Intel started sharing their magic in 2001 with the release of the first OpenCV beta. The library has since been used by developers for many projects including many early Microsoft Kinect applications. It is the basis for almost all smart phone and tablet computer vision apps including modern UWP apps and provides the foundation for machine learning on Microsoft Azure as well as all the other major AI services providers. The moment in 2001 when OpenCV became open source marks the start of the current AI revolution.

And that’s a wrap! Hopefully you enjoyed this trip down memory lane and we want to know what you learned! If you already knew about all of them, make sure to share your personal favorite open source project in the comments below or on Twitter using the #OpenSourceOctober hashtag.

If you are interested in other open source projects and initiatives that Microsoft is investing in, please check out Microsoft’s Open Source page!