With the new ability to deploy Windows SSUs and LCUs together with one cumulative update, I wanted to offer some background on how cumulative updates grow and the best practices you can employ to improve the update experience.

Why and how do cumulative updates grow?

The longer an operating system (OS) is in service, the larger the update and associated metadata grow, impacting installation time, disk space usage, and memory usage. Windows quality updates use Component-Based Servicing (CBS) to install updates. A cumulative update contains all components that have been serviced since release to manufacturing (RTM) for a given version of Windows. As new components are serviced, the size of the latest cumulative update (LCU) grows. However, servicing the same component again does not significantly increase the size of the LCU.

In the image below, you can see two examples, each with three changes. The resulting LCU in example #2 will be larger than the LCU in example #1 because it contains components A, B, and C.

During an OS release, the size of the update grows quickly and then slowly levels out as fewer and fewer un-serviced components get added to the LCU. 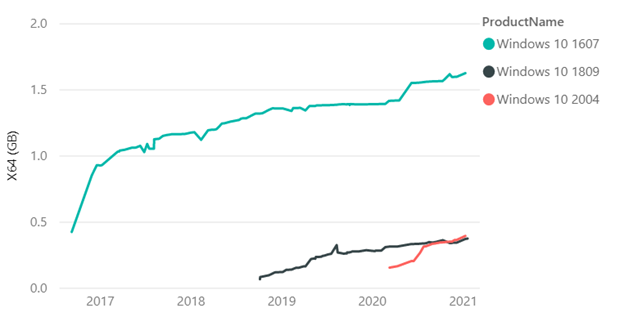 With regard to the graph above, you’ll see that there are points where the size goes down briefly due to a specific edition of Windows going out of service. For example, the Windows 10 Enterprise Long Term Servicing Channel (LTSC) has a longer servicing lifecycle than Windows 10 Home edition. When the Home edition reaches end of service, we stop servicing any components in the Home edition, which reduces the size. Shared components still get serviced.

Starting with Windows 10, version 1809, Microsoft implemented new technology to reduce the size of the LCU and growth rate, and improve installation efficiency. Maliha Qureshi’s blog post What’s next for Windows 10 and Windows Server quality updates coupled with the Windows updates using forward and reverse differentials document, aim to help you understand more about this change to support forward and reverse deltas and the benefits of reducing the size of the LCU.

Starting in Windows 10, version 1903, more improvements came along in the update package. For example, if individual binary files in a component are unchanged, they are replaced with their hash value in the update package. In the example above, if Component A had five binary files and four changed, we would only send the payload for the four that changed. Overall, this results in the LCU growing about 10-20% more slowly and is useful when the image or video files are part of the component and rarely change.

What happens when an update is installed?

The shut down and reboot phases affect users the most since their systems can’t be accessed while the process takes place.

Now let’s get to best practices that can improve your update experience:

Using Windows Update Agent (WUA) to scan for updates offline is a great way to confirm whether your devices are secure without connecting to Windows Update or to a Windows Server Update Services (WSUS) server. WUA parses all cumulative update metadata during a scan so larger cumulative updates require additional system memory. Cumulative metadata can become quite large and must be parsed in memory for WUA offline scans so machines with less memory may fail the WUA offline scan. If you encounter out of memory issues while running WUA scans we recommend the following mitigations:


Microsoft continues to investigate and improve the Windows 10 update experience as it is a critical component to stay productive and secure. Use the Feedback Hub or contact your support representative if you face any challenges when updating.