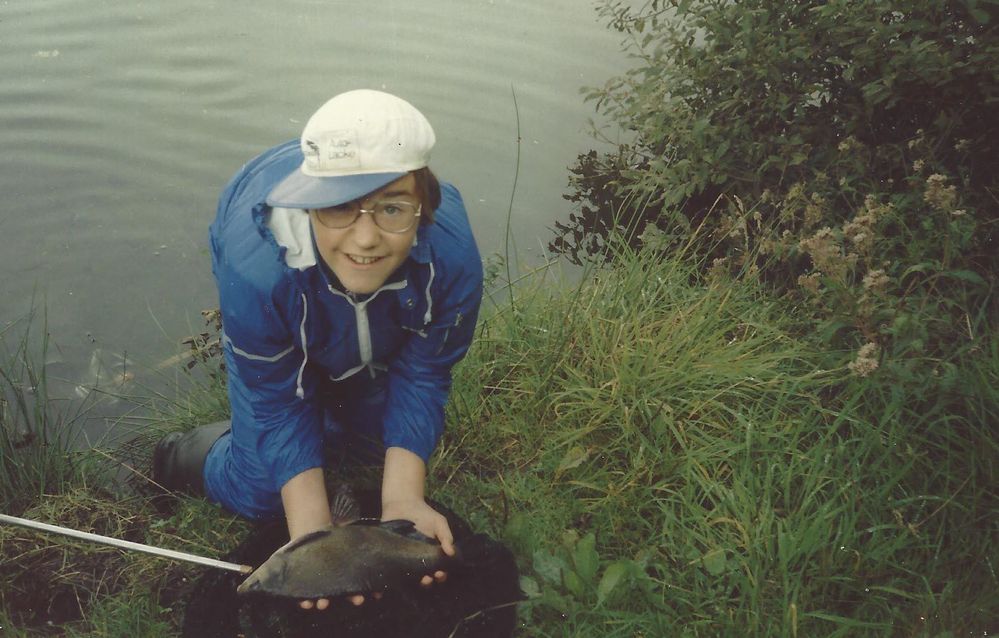 This article was written by Bob Cornelissen, a Cloud and Datacenter MVP from the Netherlands. He shares about his unique path as a wildlife and animal enthusiast, to a fisheries biologist working in the tropics, to ultimately becoming a Microsoft infrastructure generalist, a SCOM specialist and today, a business owner and MVP.

Let me start out by saying that everybody has their own path in life and that there are many possible paths someone can take. It is not about the path being right or wrong – these different paths will undoubtedly all provide you with opportunity. The good folks at the Humans of IT Community invited me to share my story after seeing how I followed an unconventional path to get where I am in IT today, and to tell a bit of my personal story. In this post, I will share about how I walked on different paths, and wound up doing what I do on the current trail I happen to be on. Perhaps that will inspire you to find your own path too. And people say I don’t walk enough!

Starting at the beginning…

When I was a child I was very interested in nature – the animals, plants and their surroundings. I was fortunate to have grown up around a large garden with animals and plants, vegetables and fruit and flowers and so on. After laying many days in the grass at the side of a pond with goldfish and other creatures, I learned about the pleasures of interactions with all the wonderful varieties of fish. I became an avid fisherman, using all kinds of techniques to catch fish for relaxation and leisure, and greatly enjoyed my time in nature. 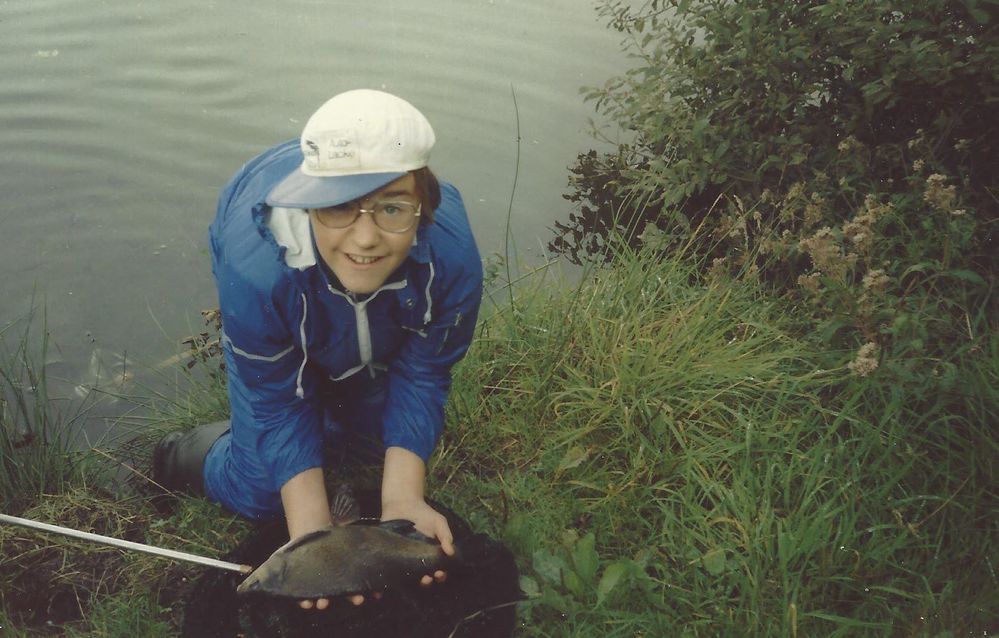 Picture of me catching my first 50 cm bream

Picture of me catching my first 50 cm bream

When it was time to finish high school and go to university, there were two topics that were the most interesting to me: veterinary school or biology. I found Wageningen University in the Netherlands and its Zootechnics field, which is mostly animal husbandry and decided to follow this path. There was a direction within this main study for Fish Culture and Fisheries, which was appealing to me given my interests. I followed this path and learned all kinds of things around biology, water, the animals living in it and of course, fish. At this point I also started to keep more aquaria at home and elected to not just go for the pretty-colored ones, but also native species and watching nature as found outside through a glass window.

Picture of one of the aquaria at home

Picture of one of the aquaria at home

Being in this type of study introduced me a lot into international affairs, because a lot of our field of study was about feeding the world population through cultured or caught seafood. We got to work with a lot of international students, which expanded my world view a lot and got me an MSc. I had the chance to go to Costa Rica and Thailand for my study, which introduced me to different climates and possibilities. Around the same time, both during my study and right after graduating, I taught myself how to create websites with HTML, CSS, JavaScript and so on. I became involved in creating an early version of distance-learning courses (e-learning) to help enable students from several European universities to follow our Fish Culture and Fisheries courses from their own locations, without having to travel across Europe. 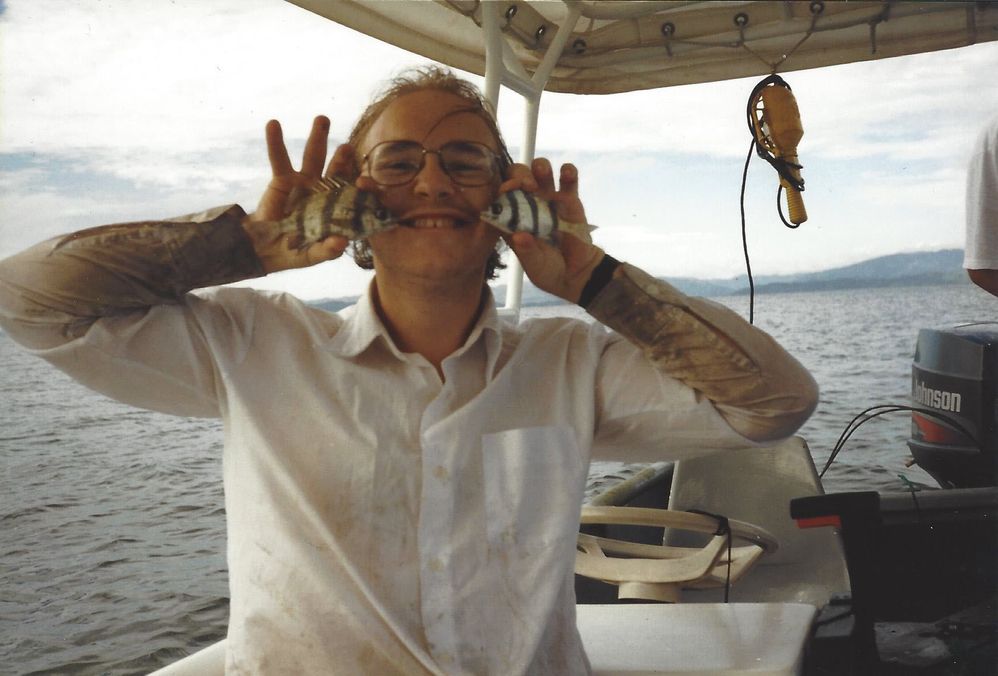 Picture taken on research boat in Costa Rica, Nicoya Gulf. Also the reason not to wear a white shirt for this work!

Picture taken on research boat in Costa Rica, Nicoya Gulf. Also the reason not to wear a white shirt for this work!

After graduating from university, I started working at the university shortly after and got a position in an organization based in Thailand, with locations all over Asia. I got involved in research and policy-making in the world of fish culture and fisheries. It was in Thailand where I met a wonderful lady who was working in the building next to ours. Our relationship got serious, and we planned to stay together and get married. However, at the same time, we found ourselves in the situation where my work position had changed, and I had to leave the country. Meanwhile I had to select my next path. Pursue a PhD in fisheries biology of some kind, or find a completely different path.

Becoming a student again in a different country outside Thailand would prohibit me from being with the one I loved due to the fact she did not have enough language and credentials to go abroad on her own. So I decided that I had to select a different path in the Netherlands, and find a way to bring my wife over. Thankfully, looking for work around the year 2001 with my background in exact sciences was an easy task to be recruited into the growing IT field. I had the options of getting into Cobol coding, testing, UNIX, Infrastructures and so on. I had the best feeling with the infrastructure direction based on servers. After working in IT for about a year, the opportunity arose to work on Windows server infrastructures and learn all about Windows 2000, applications around the datacenter infrastructures and how to manage and migrate from Windows NT up to Windows 2000 and later 2003. I decided that I liked this path and followed it.

After this first year and having decided the path I wanted to follow, my wife finally joined me in the Netherlands and we could finally begin our life together. I am so proud of my wife’s courage – remember that she left a path where she had a steady government job at a ministry with its advantages, and had to uproot her life in Thailand to live in a completely foreign country, learn a new language and had to build up a life very different from all she had known! 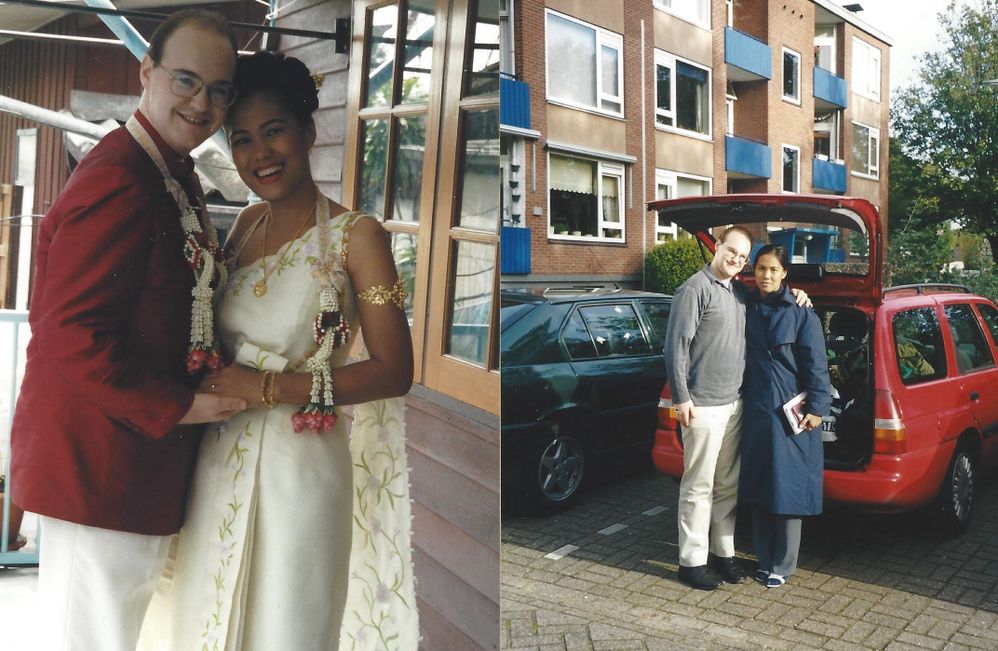 As the years went by, I switched to working for a more Microsoft-specialized company and learned more about Microsoft infrastructure technologies for large sized companies. It was then that I decided I wanted to change my path again. I had gotten pretty good at learning new technologies and was getting every Microsoft certificate I could get, very often as a charter member (from beta exams when the technologies were very fresh).

I decided that my path could go two ways: in outsourcing, or into consultancy. Since the first was not gaining a foothold for me, I focused more on consultancy. I was already working with a product called Microsoft Operations Manager (MOM, now called SCOM), and was getting recognized as one of the experts in this field. Also, I was raised and schooled to be somebody who works for some company, and not be a business owner/entrepreneur. Yet, now I found myself on the path of running a small IT business (first called BICTT, now TopQore) with some employees and needing to learn about finance, business and many other things outside of my direct comfort zones.

After a few years of consultancy, I discovered online forums for this technology and generic Windows Server technologies, and started actively helping others working on the same technology by answering questions and writing down common cases in my blog. This was how my community involvement path started, and I loved it. I was awarded the Microsoft MVP title 9 years ago till now – this was a great honor that I’m proud to say continues to this day. At this point, I was on a path already deep into the technologies via certifications and was learning a LOT. Eventually I discovered that I was on the path of doing work internationally. So, after becoming an MVP in my community path, I got to explore side trails of writing a book, being a reviewer of books and training courses, giving presentations both nationally and internationally. This gave me the wonderful opportunities to share more of what I know and what I learned with people from all over the world, and help to mentor others who are interested in learning something and finding their own path. 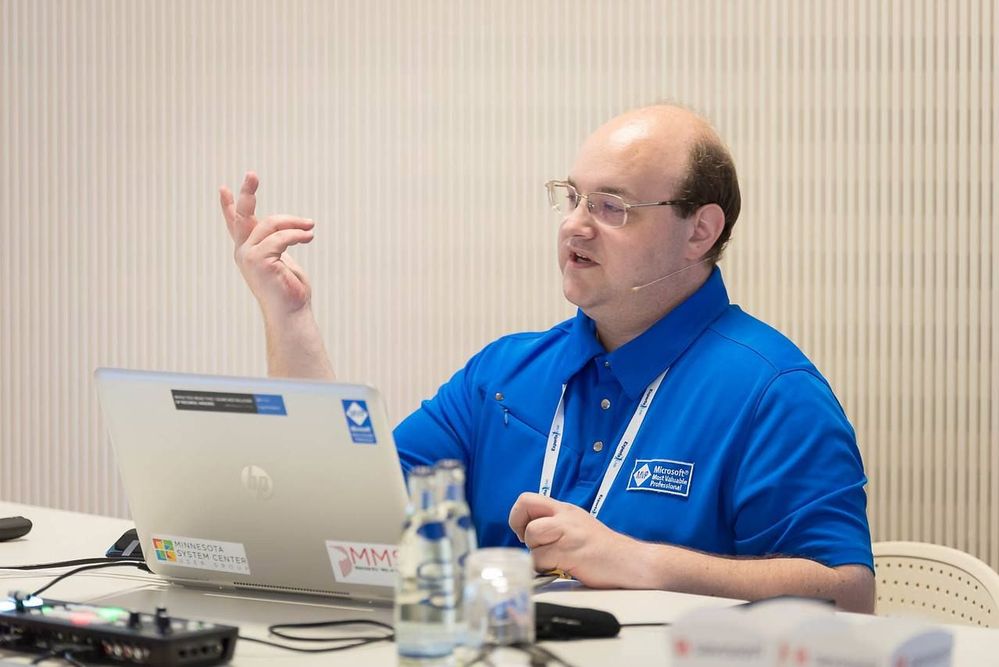 Picture presenting at Experts Live Europe a few years ago

It’s been a journey for me – from a kid interested in nature and animals, to becoming adept at fishing, to learning animal husbandry and fisheries and the natural world under the water surface, to building websites. Moving from the Netherlands to other countries and Thailand. From being alone to being in an international, cross-cultural marriage. And from knowing little about Windows server to diving deep into infrastructure and into a specific product and field of work I believe adds value to a company. And from having little community involvement to becoming a recognized Microsoft MVP, writing and presenting everywhere. From student to working for a company to owning my own company.

So many things happen over the course of our lives, and they happen in everybody’s lives. No two paths are the same – our lives are charted by the all paths that we choose to take in one way or another. Not every cross-roads presents an easy or clear choice, or a visible path to the future. Yet we still need to make a choice, and each could lead somewhere else. Like what the previous guest blogger said, never compare your journey with others – you are on a unique path filled with your own adventures!

I hope that you see there are many choices you can make, and hope you follow your heart via the trails and paths that appeal to you. I am not saying I took the right path or direction, because we never know what the other choice would have brought us. For now, I am grateful to be in IT and in a position where I can share and help others.

I want to finish up with one last thing from our personal life. I grew up around animals, studied about them and initially, made my work out of it. My wife also grew up caring for street dogs and cats when she was younger. About 8 years ago, we found ourselves on a path where we had a choice to help a group of street dogs in Thailand, and we did. We ended up running an animal shelter in Thailand with initially just a small group of dogs, which grew to over 70 dogs and even a few cats! We eventually set up a foundation called House of Tails to care for these lovely animals. My wife often spends months at this shelter, away from her second home country and husband, to take care of these animals who have nobody else to take care of them. This is a very difficult path to follow, but she does it because she has such a big heart to care for others who are unable to take care of themselves. Talk about taking the difficult road, but from the heart!

Luckily, she does not have to deal with wondering why the printer does not work AGAIN, like us IT people do, huh? 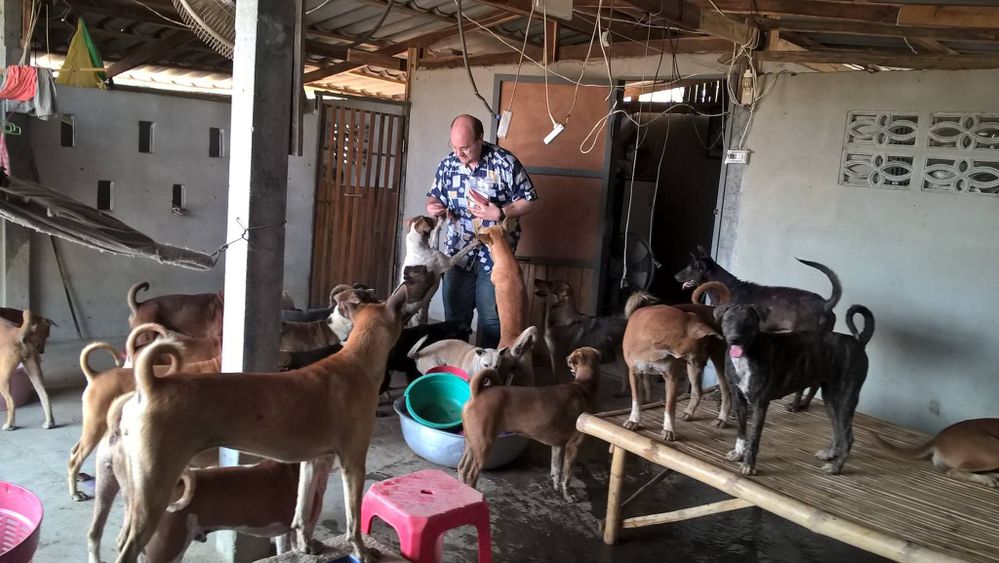 Picture at House of Tails shelter in Thailand

Tell us about your path, and if you need advice on how to follow one of the many IT-related paths, keep following the Humans of IT program and the mentoring program. We hope it helps and inspires you!

Wishing you the best,