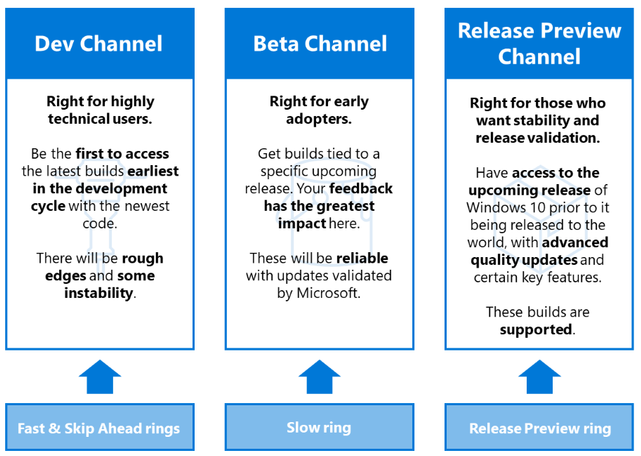 On June 15, 2020, Windows introduced Windows Insider Channels, which change the way we release new builds to all Windows Insiders. We are converting our current ring model, based on the frequency of builds, to a new channel model that pivots on the quality of builds and will better support parallel coding efforts. The goal of this blog post is to provide clarity for existing and new Windows Insiders as you choose the channel experience that is right for you. Image depicting a comparison of key characteristics for Dev, Beta, and Release Preview Channels, and how those channels map to the rings previously used for the Windows Insider Program

The Beta Channel is recommended for IT administrators who want to explore new features as they are being created, and for those who want to provide feedback with maximum impact to help shape the product. We recommend that you enroll a small subset of devices in the Beta Channel. These devices can be within the IT department or with end users who are Windows enthusiasts and enroll their devices. Updates from the Beta Channel will be tied to the upcoming Windows 10 version. Users on Beta Channel will receive security updates to ensure preview builds stay patched in line with production software.

To receive Beta Channel builds via Windows Update for Business, follow these steps:

Having devices in the Beta Channel allows you to explore upcoming features as they are being created; however, you may decide to focus your validation efforts on a version of Windows 10 that is about to be released. In that case, we recommend that you have a set of devices on the Release Preview Channel. This channel allows you to validate the next version of Windows 10 a few months prior to release, and the release is supported for IT administrators enrolled in the Windows Insider Program for Business.

We recommend that 1% of your organization’s devices run on Release Preview. Ideally, this 1% is a diverse group of devices that represents the hardware and software used across your organization. To fully leverage Release Preview, utilize your preferred management tool with your typical policy set. This will ensure that you can validate the upcoming release and that your policies and rollout process are working as expected prior to release.

Use Windows Update for Business to deploy Release Preview builds

Use WSUS and Configuration Manager to deploy Release Preview builds 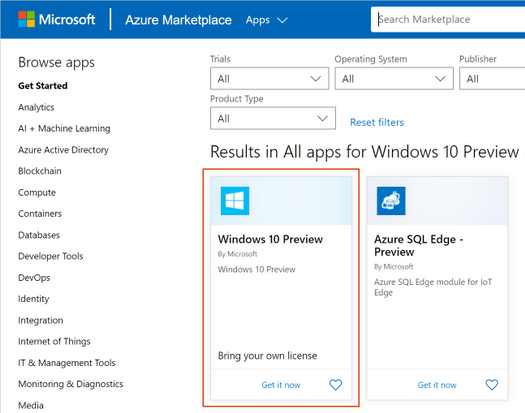 Windows 10 Preview in the Azure Marketplace

Visit the Windows Insider Program website and select the ISOs labeled from the Release Preview Channel. ISOs are typically released for Release Preview builds within a week of being shipped via Windows Update.

For any major issues that may become deployment blockers after a feature update is released, IT administrators can use the Microsoft Support option for the Release Preview build of the upcoming Windows 10 release.

To provide feedback, search for “Feedback Hub” using the search bar in Windows 10. In Feedback Hub, you can report problems and suggest features, quickly navigate to the Windows Insider site, and find more ways to connect with the Windows Community.

Select Feedback in the left pane. Then you can enter your feedback in the fields provided and explore additional information and feedback. 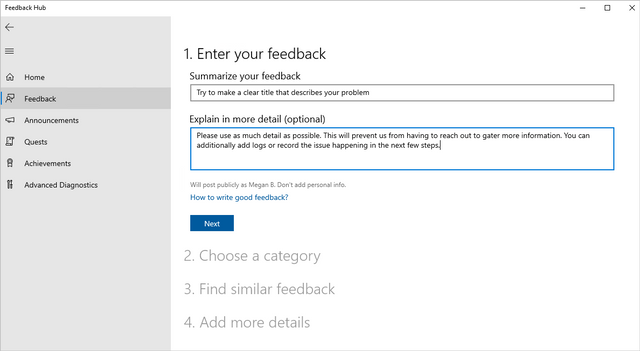 We appreciate your new or continued support of the Windows Insider Program for Business. Please let us know what we can do to best meet your needs for feature exploration and validation of upcoming feature updates prior to release.