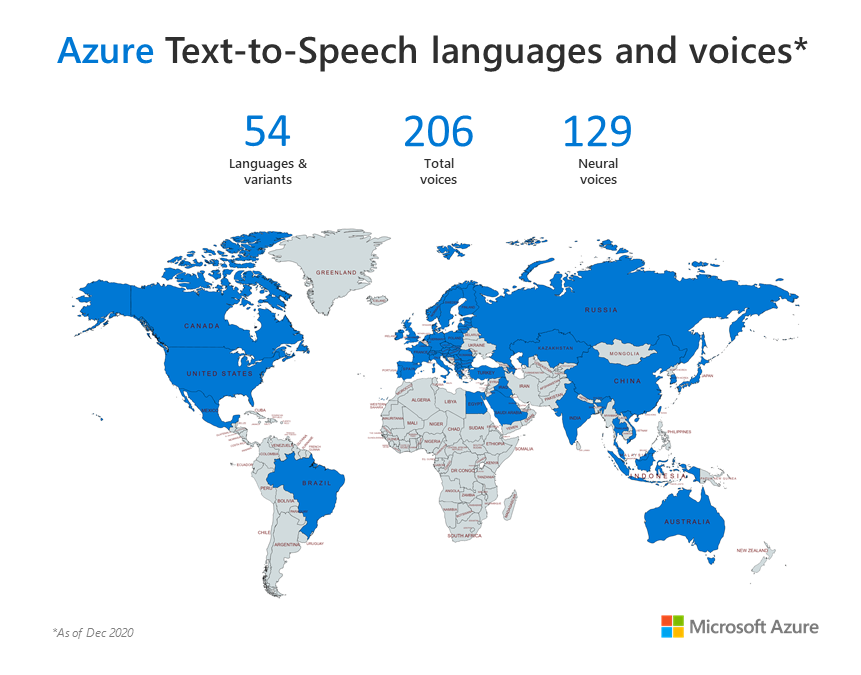 Neural Text to Speech (Neural TTS), a powerful speech synthesis capability of Cognitive Services on Azure, enables you to convert text to lifelike speech which is close to human-parity.  Since its launch, we have seen it widely adopted in a variety of scenarios by many Azure customers, from voice assistants to audio content creation. More and more customers are asking for richer and more diverse choices of synthetic voices for different use cases.

Today, we are excited to announce that Azure Neural TTS has added 51 new voices for a total of 129 neural voices across 54 languages/locales. With this release, we provide at least one male and one female voice for customers to choose in each language/locale.  In total, Azure TTS now enables developers to reach millions more people with more than 200 voices available in standard and neural TTS.

Neural TTS has now been extended to support 51 new voices, which will bring to you the capability to have both male and female voices in each language for your apps. You can hear samples of the voices below, or try them with your own text in our demo.

In total 46 new voices are released across the 49 locales that are generally available in the Azure data centers/regions that support neural TTS (see the full list of Azure regions here).

5 new voices are in public preview

We have also added 5 male voices in the 5 low-resource languages that have been supported since November. These voices are available in public preview in three Azure regions: EastUS, SouthEastAsia and WestEurope.

Hear the samples below:


With this release, we now support a total of 129 neural voices across 54 languages/locales. In addition, over 70 standard voices are available in 49 languages/locales. Visit Language support – Speech service – Azure Cognitive Services | Microsoft Docs for the full language and voice list. 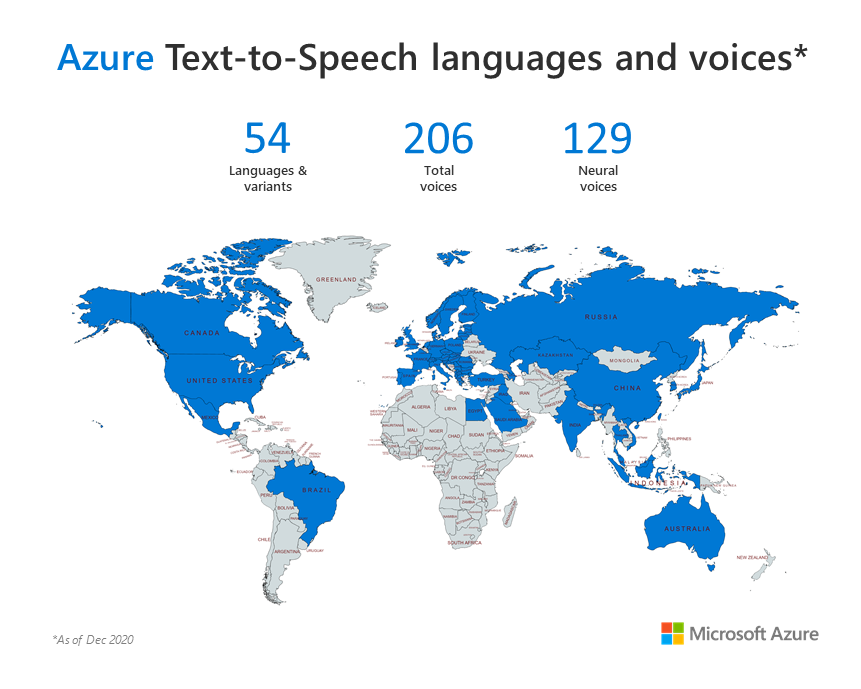 In general, Neural TTS can convert text to lifelike speech, however there are nuances that can always be improved. For example, we have customers who have requested the ability to support a scenario where Katja, our de-DE neural voice, can pronounce English words in the context of a German sentence. This was valuable feedback, and we anticipate a similar need across languages.

For German, we observed that our users prefer the voice to handle an English word/phrase as close as the native English pronunciation. To enable a voice model to speak English as a second language, it is normally required that we collect the speech data of the same speaker speaking English besides his/her native language. This is a big challenge as we do not have sufficient multi-language speech data from our German voice talents. By leveraging cross-lingual capability of UNI-TTS, we are able to generate more English pronunciation data with the transferred voice from our German voice talent. Such data is used to improve the quality of the English word/phrase pronunciations for the German Katja voice, so Katja can pronounce English words in a more natural way.

The CMOS metric is used to measure the improvement of the English word pronunciation for Katja. Below table shows that the updated model is significantly better in pronouncing English words in the context of a German sentence.


This improvement has now been released to the Azure Neural TTS service for Katja. Moving forward, we’ll extend this capability to support more languages.

Tell us your experience!

By offering more voices across more languages and locales, we anticipate developers across the world will be able to build applications that change experiences for millions. Whether you’re building a voice-enabled chatbot or IoT device, an IVR solution, adding read-aloud features to your app, converting e-books to audio books, or even adding Speech to a translation app, you can make all these experiences natural sounding and fun with Neural TTS.

Let us know how you are using or plan to use Neural TTS voices in this form. If you prefer, you can also contact us at mstts [at] microsoft.com. We look forward to hearing your experience and developing more compelling services together with you for the developers around the world.

Explore the available voices in this demo

Add voice to your app in 15 minutes