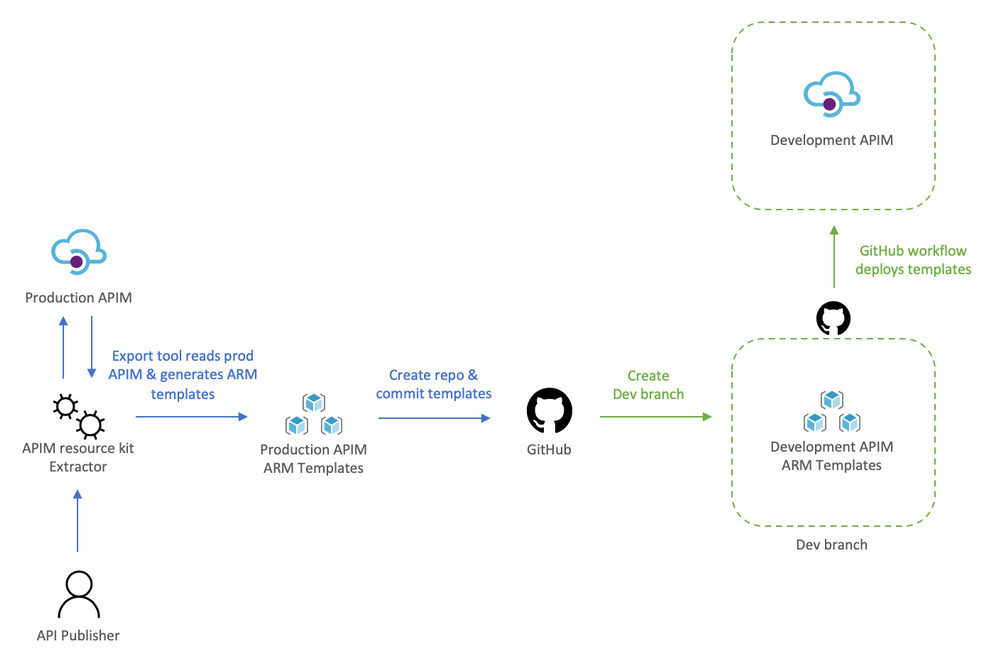 This post was inspired by Azure/Azure-Api-Management-DevOps-Resource-Kit and targets the How-To process vs the semantics of the problem and the proposed solution, which are very well defined in the Resource Kit GitHub page as well as providing release builds and source code for the tools used throughout this guide.

In this scenario our Azure API Management service (APIM for short) has been deployed and in production for some time already, the API publishers and API developers all use the Azure Portal to operate the service and launch new APIs. Publishers and Developers have agreed that it is time to adopt a DevOps process to streamline the development, management, and environment promotion of their APIs.

This is a transformation journey, thus it is important to keep in mind that the current Prod APIM will still be Prod. Our journey will:

The Dev environment is created by taking a snapshot of Prod to achieve symmetric between the two environments. During this step the two instances are not synchronized, therefore, you can either abstain from making changes to Prod, or repeat the initial manual deployment of Dev.

To help us visualize the process let’s take a look at the following diagram: Because we are in a transformation journey, we want the capture to entirely reflect Prod, thus the config used for the Extractor is set to use the production APIM as the source and the destination, this way the ARM templates generated are always production ready. Remember, we are creating development off production, we will override parameters at deployment time to target the Dev instance.

The config file defines how the Extractor will generate the templates, the following apimExtract.json will use the same instance as the source and target, split each API into its own entity, and parameterize most of the assets needed.

Extract the current deployment of your environment:

The initial extraction saves the ARM templates to contoso folder. This folder will only store files that have extracted and that are considered service level.

Once the extractor finishes generating the ARM templates, they need to be added to a repository. This will give us a master branch with production ready templates, which will later be automatically deployed via Pull Request ( PR ).

Checking ARM templates into the repository

Head over to Github and create a new repository. Prepare your folder hierarchy before adding, committing, and pushing the ARM templates.

At the root, we have two folders:

With the initial commit done, we are ready to create a the dev branch: 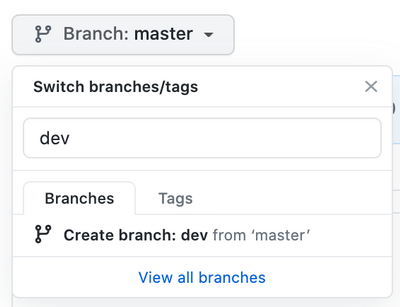 Checkpoint: by now you should have:

I’ll be using GitHub Actions to automate deployments to Dev APIM and subsequently to Prod APIM.

The workflow Dev-Apim-Service.yaml has the following responsibilities:

At this point you should have a full CI/CD workflow that automatically deploys your Dev branch into your Dev APIM instance. Before continuing, this would be a good place to validate the Dev instance and ensure all is working as expected.

Once the initial Dev APIM has been created it is important that the two personas: API publishers, and API developers incorporate new steps in their process. Typically, API publishers will use the Azure Portal to make changes, and API developers would be working with OpenAPI, but this could also cause configuration drift, and having the two instances running different APIs.

Therefore, API publishers and developer need to incorporate the Azure APIM Resource Kit in their process workflow. need use the Extractor tool as the last step in their process.

The following diagram illustrates how an API publisher would work with the Dev APIM. 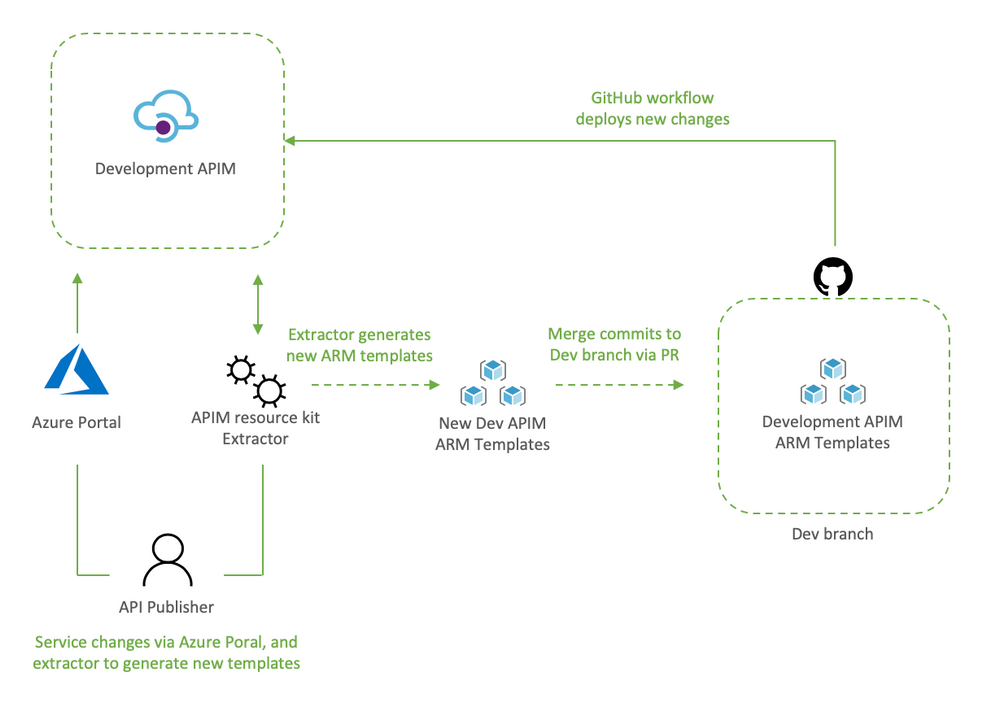 The reason the changes done via the portal are then re-applied to Dev APIM via Github Actions it’s validate that templated can be successfully deployed via code, and it allows for dev branch to be merged into master via PR.

Dev branch deployments is triggered by Dev-Apim-Service.yaml, which filters branch level events to only include changes done to contoso and overrides parameters to target Dev APIM.

The diagram would show what a developer process would look like. 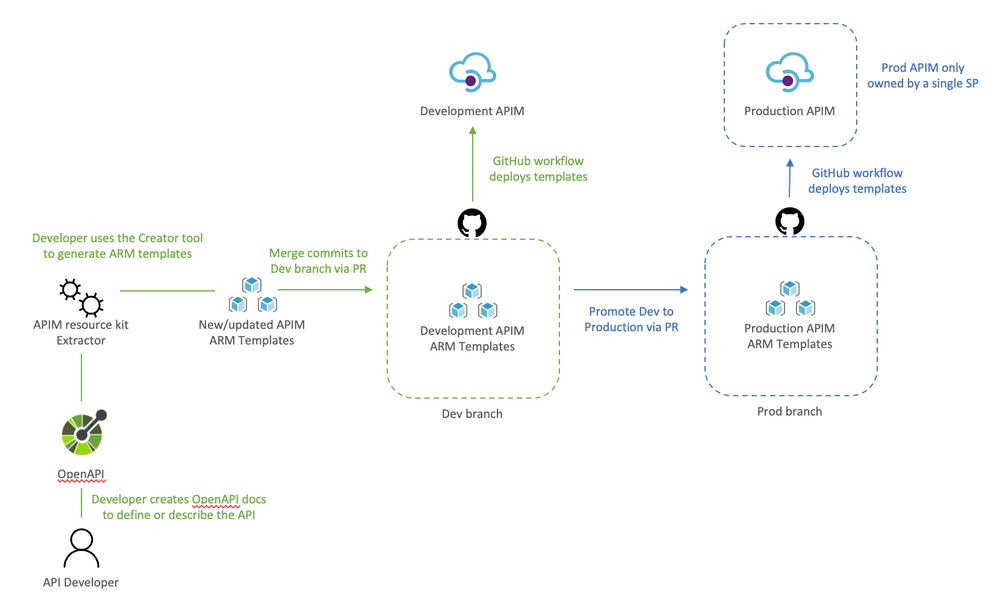 The reason the APIs are saved to apis instead of somewhere inside contoso folder it’s so that developing APIs does not trigger an APIM service deployment. And using a separate workflow Dev-Apim-Apis.yaml we can better control how the two are triggered and deployed.

Once Dev APIM is validated and publishers and developers have incorporated the changes in their process, it is time to promote Dev to Prod. The promotion it’s done by creating a pull request from dev to master as illustrated below. 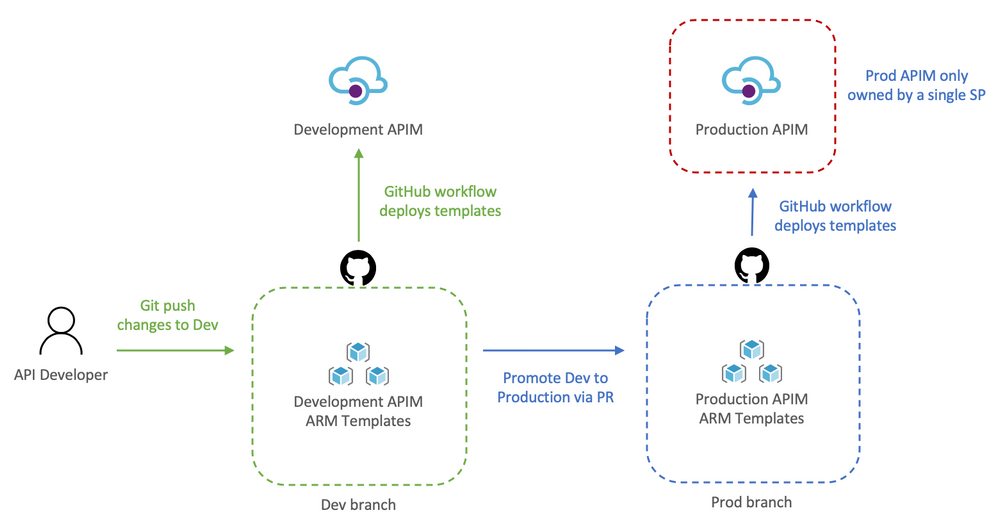 Let’s review how this works:

Because the templates’ parameters files already target prod there is no need to override anything, therefore, the CD workflow simply deploys any templates it finds in contoso and apis.

Now that Dev and Prod are deploying successfully, we apply RBAC permissions to Prod just to make sure that no one can access the resource via the portal, cli, powershell, etc and make “unmannaged” changes. This can be done by: