Return of the Power BI join with Kusto 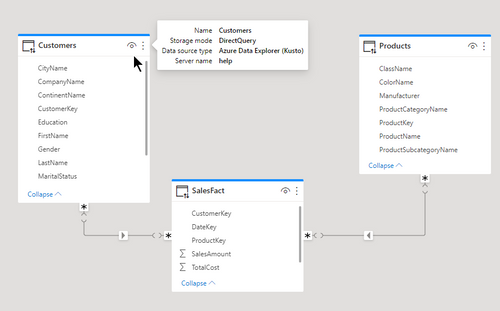 Return of the join in Power BI with Kusto

If you are not interested in all the details:

The experience of many users, trying out Power BI with Kusto/ADX data was not always great.

Trying to use such tables in PBI using Direct Query was not always fast and sometimes failed with errors about not enough memory to perform the query.

The reason behind this problem in many cases was the use of joins between tables.

You can read about joins here.

One of the important recommendations is when joining a large table (Fact) with a much smaller table (Dimension), is to mention the small table first:

It is also recommended in such cases to add a hint:

The hint allows the join to be fully distributed using much less memory.

When you create a relationship between two tables from Kusto, and both tables use Direct Query, PBI will generate a join between the two tables.

The join will be structured in this way:

This is exactly the opposite of the recommended way mentioned above.

Depending on the size of the fact table, such a join can be slow, use a lot of memory or fail completely.

In blogs and presentations, we recommended few workarounds.

I’m mentioning it here because I would like to encourage you to revisit your working PBI reports and reimplement the joins based on the new behavior that was just released.

If the dimension tables are imported, no joins will be used.

Any filters based on a dimension table will be implemented as a where based on the column that is the base of the relationship. In many cases this where statement will be very long:

If you filter on the gender F and there are 10,00 customers with F in the gender column, the list will include 10,000 keys.

This is not optimal an in extreme cases it may fail.

This solution will have good performance, but it requires more understanding of KQL and is different from the way normal PBI tables behave

Join the tables on ingestion using an update policy

Same as the previous method but requires even a deeper understanding of Kusto.

Starting from the September version of PBI desktop, the Kusto connector was updated, and you can use relationships between dimension tables and fact table like with any other source with a few changes:

The query as shown takes 0.5 seconds of CPU and uses 8MB of memory

The same query without the new setting takes 1.5 seconds of CPU and 478MB of memory.