This article includes frequently asked questions about API Management while configuring it with Azure networking components such as VNET, NSG and route tables.

If you feel there are more topics to be covered under the demystifying series, let us know in the comments section.

What is NSG? Purpose of NSG?
Scenarios for using NSG with API Management
Scenario: The APIs in API Management shows loading, and the APIs never show up.
What are the mandatory inbound and outbound rules in NSG for API Management?
Recommendation for NSG at the API Management level

3.    Scenario: The APIs in API Management shows loading, and the APIs never show up

Navigate to the APIs section under API Management and open browser developer tools. In the console section, you will see a similar message based on the screenshot below.

{“code”:”ManagementApiRequestFailed”,”message”:”Failed to connect to Management endpoint <your_apim_instance_name>.azure-api.net:3443 for a service deployed in a Virtual Network. Make sure to follow guidance at https://aka.ms/apim-vnet-common-issues.”,”details”:null,”innerError”:null}

4.    What are the mandatory inbound and outbound rules in NSG for API Management?

There are few mandatory ports which needs to be configured under the inbound and the outbound rules of the NSG for the proper functioning of API Management.

The Azure Storage account connectivity is required in the outbound rules to store the API Management operation and data. This is the point where it is cached and retried for API Management.

5.    Recommendation for NSG at the API Management level

All Incoming/outgoing traffic for the service goes through Azure Load balancer. So, at the minimum, it is required to allow incoming port 80, 443, 3443 and any outgoing ports that are required by their (APIM) backend. We recommend all ports as if you created a new API that connects to a backend over a non-standard port, that would fail unless the port is opened up for Azure Load Balancer.

The security rule for Azure Load balancer must be configured as shown in the below screenshot. 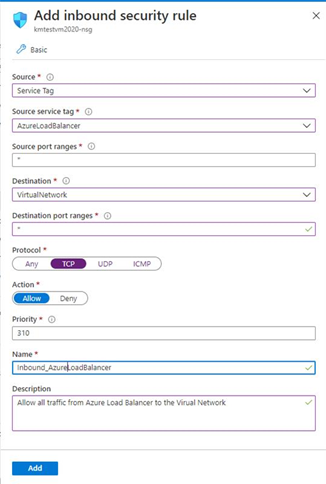 Azure routes outbound traffic from a subnet based on the routes in a subnet’s route table. Azure automatically creates system routes and assigns the routes to each subnet in a virtual network. You can’t create system routes, nor can you remove system routes. There are scenarios where the system routes will not be sufficient to fulfill the requirement and in order to establish a connection/request-flow, we will need to over-ride the default routes using custom routes. You can achieve this using User Defined Routes concept.

2.    How can UDR be configured with API Management?

UDR can control only the outbound traffic from the subnet. When the API Management is configured in a subnet, route table can be associated with that subnet. The route table will have user-defined routes (UDR) to determine the next hop type for a particular address prefix. 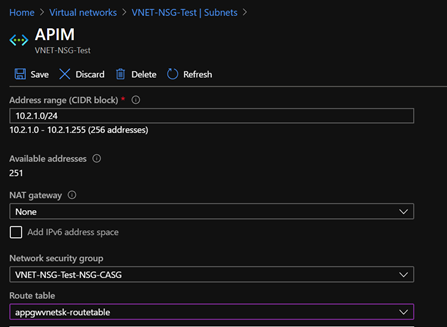 [The above screenshot shows the subnet in which the API Management is configured. The subnet contains the address range, NSG and a Route Table (UDR)].

3.    Why my APIs are not loading when the API Management is configured in a VNET?

The API management service is hosted in an internal mode and the APIs under the API Management are not showing up and keep loading forever. The below screenshot shows a sample of the issue scenario and what the console section of the browser developer tools read. [Refer to the screenshot from 3rd point under NSG]

{“code”:”ManagementApiRequestFailed”,”message”:”Failed to connect to Management endpoint <your_apim_instance_name>.azure-api.net:3443 for a service deployed in a Virtual Network. Make sure to follow guidance at https://aka.ms/apim-vnet-common-issues.”,”details”:null,”innerError”:null}

The first pointer to check if the subnet in which the API Management is hosted has NSG associated with it and inbound access for management endpoint (3443) is allowed.

If the issue is still occurring, then study the architecture and determine if the API management VNET is learning default route(0.0.0.0/0) from on-premise over ExpressRoute or BGP over IPsec or if forced tunneling is configured on the API management subnet. Creating a user-defined route for default (0.0.0.0/0) traffic in route table can force all traffic from API Management delegated subnet to flow through a Network Virtual Appliance or Virtual Network Gateway. To overcome the limitation, we need to add precise user-defined routes(UDRs) to steer management traffic back to Azure by setting the next hop type of these routes to “Internet”.

Associate the route table to the subnet of the API Management and you can find the steps for the same here.

Creating UDR in a Route Table

3.     Enter Route name (any), address prefix, next hop type and its next hop address (if required).

The benefits of using virtual network peering, whether local or global, include:

2.    How different is VNET Peering for API Management than connecting from the same VNET?

Peering of VNETs will prove to be handy in this scenario. You can peer both the VNETs using VNET peering, now both the VNETs tend to act as a one whole VNET. So, it is possible to access the resources present in one VNET by the resources from the other via a private connection (private IP).Hence API Management will be able to import an Application from the other VNET as an API and work as if it was from the same VNET, thanks to VNET peering. Below provided is a pictorial representation of how VNET peering works and encapsulates resources from both VNETs to act as if a single VNET. 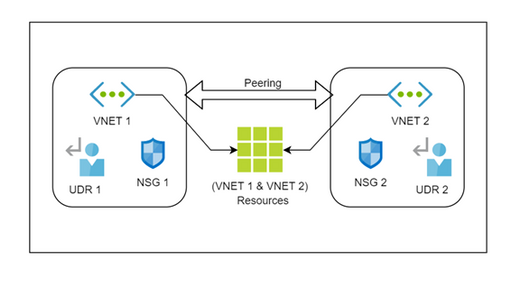 [The NSG and route table associated with subnets of VNET 1 will be effective only within VNET 1, even though if there is a VNET peering with VNET 2 (the same applies for VNET 2). The resources under both the VNETs tend to act as if it is present under a single VNET]

3.    Unable to load APIs in Azure portal for API Management as the NSGs and Routes are publicized in VNET Peering

The browser developer tools console section reads something like, the Management endpoint is not reachable or not found.

As a primary step, we navigate to the NSG associated with the API Management subnet and see that the port 3443 is allowed under the inbound rules and yet the issue is existing. Once the VNET peering is removed for the VNET which contains the API Management in a subnet, the issue will get resolved. But, at this point the backend of one of the API in API Management is present in the other VNET (peered one). Hence all the request to the API fails as it will not be able to reach the backend. Removing VNET peering cannot be considered as a solution at this point.

Add a user-defined default route for 0.0.0.0/0 address prefix with next hop type as Internet

When we connect VNETs using VNET Peering but the routes are publicized by the connected network and will affect the connecting network.

We may be able to correct this by associating a route table to the API Management subnet and add the required Control Plane IP addresses.

4.    What is the limitation of VNET Peering with API Management?

Connectivity from a resource in a globally peered VNET in another region to API Management service in Internal mode will not work due to platform limitation. For more information, see Resources in one virtual network cannot communicate with Azure internal load balancer in peered virtual network